Why do I shop at Bloomingfoods?

Why do I shop at Bloomingfoods? This is a question I’ve found myself pondering recently. It started last Thanksgiving when my mother returned to living in town full time. We went shopping for the big meal and I was trying to convince her to go to Bloomingfoods instead of Kroger or (god forbid) Sam’s Club. 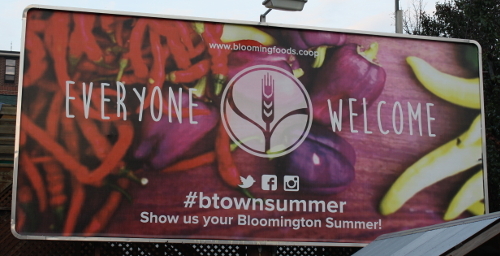 Her primary value when purchasing food has always been quality first and low price a close second. She seems pretty representative of a large share of the American populace who have been indoctrinated with the idea that the most patriotic thing they can do is consume. And the best way to consume is to find a deal.

I was trying to talk her out of this conditioning, but found myself unable to craft an argument in favor of Bloomingfoods. I could only argue against the alternative. Through out the discussion her point was, “I can get the same stuff at Kroger for much less.” I couldn’t respond with the statement that Bloomingfoods takes care of its employees, I know that it doesn’t. Meanwhile, Kroger has unionized labor. So why shouldn’t my mom go to Kroger to get the same products for less? And why don’t I? Cooperative? Or coop only in name?

Why do I continue to shop at Bloomingfoods?

I’ve been a Bloomingfoods member owner since I moved back into town about four years ago. While away at college I became involved first in the local food movement, and then with the environmental, sustainability and permaculture movements. When I returned to Bloomington I knew I wanted to get involved in all of these movements locally. Joining the coop was one of my first moves in that direction.

I was really excited to be a part of it. I had images of a business I would have a say in. That I could volunteer for—like the coop I’d briefly been a part of in New York. One that would take care of its workers, seek out local and organic food and try to minimize its environmental impact. One that would actively try to do good in the world and one that I could happily support.

Almost immediately part of that image began to dissipate. There were no volunteer opportunities—that I knew of I told myself I would make it back with the end of the year profit sharing check. This coop just used a different mechanism. But when that check showed up, it was a measly $30—after I’d spend thousands. It also quickly became apparent that there was almost no transparency. The newsletter didn’t talk about coop issues. The minutes from board meetings were conspicuously absent. Indeed, until recently I had no idea when board meetings even were. They weren’t advertised.2 The newsletter mostly included fluff articles and local events. I had no idea what was going on internally to the coop, and no clear channel for finding out. It took befriending many of the coop’s employees for the rest of this vision to chip away.

As I became more and more privy to internal gossip, I learned that the employees weren’t actually well cared for. Loyal employees who’d worked there for years were still working part time and making below living wage. There was no union, nor any kind of employee representation on the board. The employees at the bottom felt like they had no channel through which their voices could be heard.

The more I shopped at Bloomingfoods, the more I realized that they carried very little local produce. What they did carry all seemed to either not be labelled with its origin or came from one farm, Stranger’s Hill. As it turns out, George Huntington, the general manager has partial ownership of Stranger’s Hill. Most of what Bloomingfoods carries is big organic. Much of it is even conventional.

As I got to know local farmers, I started to learn about what the coop required of them in order to carry their produce. One local farmer I spoke to told me that he had given up trying to sell to Bloomingfoods. When he’d attempted in the past he’d been told to match the prices of the big organic farms in California. Which is impossible for him to do, and unreasonable for a coop to ask of him. And yet, even as I learned all of this it never translated into questioning my shopping there. Until I tried to convince my mom to follow suit, and realized I couldn’t.

So, now I am on a quest. A quest to understand what’s going on with Bloomingfoods. Why is it that this coop operates in a manner apparently so far from its advertised values? And what can we, as member owners, do to change this? Are there good reasons for the ways in which it departs from its mission statement and image? Or is it simply a matter of poor management and member owners who haven’t demanded better? I hope to find out, and to start a conversation among member owners. What can we do to make Bloomingfoods do better?